The Lord led me to Psalm 45 in which Holy Spirit dropped this prayer in my spirit. I believe it is to be released to be recited as a personal prayer for this season by believers in the body of Christ.

“Father, I want to know Your Son, my Lord, Savior, Big Brother, and Best Friend Jesus Christ, as my Messiah and Bridegroom.   In Jesus Name I pray, and I thank You in advance for honoring me to glorify You and to lift Jesus high, that all people will be drawn to Him, call on His Name, repent of their sins, accept Jesus Christ as their personal Lord and Savior, and His sinless, spotless and atoning Blood as payment in full for their sins (past, present, and future), and be reconciled back to You, becoming Your sons and daughters of Your Righteousness because of Jesus. Amen and Amen.”

Psalm 45: The Glories of the Messiah and His Bride

To the Chief Musician. Set to “The Lilies.”A Contemplation of the sons of Korah. A Song of Love.

My heart is overflowing with a good theme;
I recite my composition concerning the King;
My tongue is the pen of a ready writer.

You are fairer than the sons of men;
Grace is poured upon Your lips;
Therefore God has blessed You forever.
Gird Your sword upon Your thigh, O Mighty One,
With Your glory and Your majesty.
And in Your majesty ride prosperously because of truth, humility, and righteousness;
And Your right hand shall teach You awesome things.
Your arrows are sharp in the heart of the King’s enemies;
The peoples fall under You.

Your throne, O God, is forever and ever;
A scepter of righteousness is the scepter of Your kingdom.
You love righteousness and hate wickedness;
Therefore God, Your God, has anointed You
With the oil of gladness more than Your companions.
All Your garments are scented with myrrh and aloes and cassia,
Out of the ivory palaces, by which they have made You glad.
Kings’ daughters are among Your honorable women;
At Your right hand stands the queen in gold from Ophir.

Listen, O daughter,
Consider and incline your ear;
Forget your own people also, and your father’s house;
So the King will greatly desire your beauty;
Because He is your Lord, worship Him.
And the daughter of Tyre will come with a gift;
The rich among the people will seek your favor.

Instead of Your fathers shall be Your sons,
Whom You shall make princes in all the earth.
I will make Your name to be remembered in all generations;
Therefore the people shall praise You forever and ever.
(Source: Biblegateway.com)

With warmest regards,
And in service of the Most High King,

Enjoy this powerful radio broadcast by Michelle and Daniels and myself, in addition to reading this rich revelation below!

I dreamt that I was in the coatroom of a banquet hall for a wedding celebration. The hall was filled with people.  There was a dress that was laid out for the bride, but she never came; however a new bride came. This bride’s name was Wendy.  As she entered the room, she smiled but didn’t say a word. Her hair was curly with locks of golden brown.  The Lord told me that her hair was made with the sand of eternity.

When I went to give her the dress, a second wending dress appeared supernaturally. I knew that this second dress was the one I was to give her.  At that time, I raised a tambourine embedded with silver bells, held it high in my right hand, and shook it to get everyone’s attention.

Revelation and Interpretation by Michelle Daniels and Matthew Gargano:

The year 5777/2017 is the Year of the Bridegroom. It is the year that Jesus is on the earth preparing His bride, the church.  The Lord allowed us to see, in part, what His bride will look like:

“Christ also loved the church and gave Himself for her, that He might sanctify and cleanse her with the washing of water by the word, and that He might present her to Himself a glorious church, not having spot or wrinkle or any such thing, but that she should be holy and without blemish” (Ephesians 5:25b-27).

The bride that those were expecting did not come, because she was the notion of the bride that was conjured up by the unsurrendered soul and the flesh (the image of what “church” people thought the bride should look like).

The true bride, the one worthy and acceptable unto Jesus, came forth with the name Wendy, and curly golden-brown hair. The very name Wendy means “friend” (Thompson and Beale, The Divinity Code).

“As the Father loved Me, I also have loved you; abide in My love.  If you keep my commandments, you will abide in My love, just as I have kept My Father’s commandments and abide in His love.  These things I have spoken to you, that My joy remain in you, and that your joy may be full.  This is My commandment, that you love one another as I have loved you.  Greater love has no one than this, than to lay down one’s life for his friends.  You are my friends if you do whatever I command you.  No longer do I call you servants, for a servant does not know what his master is doing; but I have called you my friends, for all things that I heard from My Father, I have made known to you.  You did not choose Me, but I chose you and appointed you that you should go and bear fruit, and that your fruit should remain. That whatever you ask the Father in My Name He may give you.  These things I command you, that you love one another” (John 15:9-17).

The bride was of average appearance (outside), but her countenance was beyond beautiful (that which radiated from within—the heart).  She didn’t need to say a word, because her countenance was her voice which spoke in the language of the Spirit.  She was not outwardly adorned, which represents what looks good to the world (miracles, signs, and wonders), as she had moved beyond that.

The people who focus on the outward appearance are those who have little to no relationship with the Lord—those in which Jesus said “I know you not” (Matthew 7:23).  The bride was not concerned with outward appearances, but rather the inward, which represented falling in love with Jesus.

Jesus’ true bride could never be adorned in anything made by the world, which is why the second wedding dress appeared supernaturally, which was her true adornment.

The fact that the Lord said that the bride’s hair was “made with the sands of eternity” represent how eternity has now invaded time. Just as it did when Jesus was born and walked the earth, and is now walking on the earth.  He is inspecting the fig trees (the churches), and He is judging their fruit, or lack of fruit, for the purpose of preparing His bride.  This is also a time of determining who will be among the wise and who will be among the foolish virgins; for the choices of the heart that we make will either bring us closer to God, or move us farther away from Him.

The fact that the tambourine was lifted up high in the right hand, getting everyone’s attention, is representative of our call to lift Jesus up high that all people would be drawn to Him (John 12:32).  Jesus is God’s gift to us; and we, as a bride, are a gift back to Him.  The right represents God’s power revealed through flesh (Exodus 15:6, 1 Peter 3:22).

The three 7’s of the Hebrew year 5777 (2017) represent perfection, completion, and alignment of our spirt, soul, and body; jointly fit and grafted into the Holy Trinity—God the Father, God the Son, and God the Holy Spirit.  The 5 represents this process of perfection, completion, and alignment which is anchored in God’s Grace, made manifest in the birth, life, and resurrection of His Son, our Lord, Savior, and Bridegroom, Jesus Christ.  These sevens also represent three doors facing to the left; again, representing the Trinity, with left being the direction of God’s strength or ability demonstrated trough man’s weakness (2 Corinthians 12:9a-10b, Judges, 20:16).

“Here I am! I stand at the door and knock. If anyone hears my voice and opens the door, I will come in, and we will share a meal as friends” (Revelation 3:20).

“And He said unto me, My grace is sufficient for you, for My strength is made perfect in weakness” (2 Corinthians 12:9).

“And Jesus spoke to them saying, ‘All authority has been given to Me in heaven and on earth.  Go therefore and make disciples of all the nations, baptizing them in the name of the Father, and of the Son, and of the Holy Spirit, teaching them to observe all things that I have commended you; and lo, I am with you always, even unto the end of the age.’ Amen” (Matthew 28:16-20)

With warmest regards,
And in service of the Most High King,

It is with great privilege to announce that Pastor Michelle Daniels and I were offered our own weekly radio spot!  God is truly opening doors!  We felt led to name our show “ELAVATE!” after God as “El`aleh {el-aw-lay’}, God of ascension/elevation.  Thus, the intentional spelling of our version of “ELAVATE!” God is calling us higher, and we are excited about responding to this call! Join Pastor Michelle and me every Wednesday evening from 6.30-7PM on SOAR radio as we go higher and higher! Thanks and God bless you!

Click on the link below to listen to our first radio broadcast entitled “Accessing the Culture of Heaven.”  There is a 3-minute opening song, “Before the Throne” by Shekinah Glory which will bless you greatly.

Join us every Wednesday from 6.30-7PM CST on SOAR Radio. You can download the app to listen live at www.soarradio.com.

Thanks and God Bless! 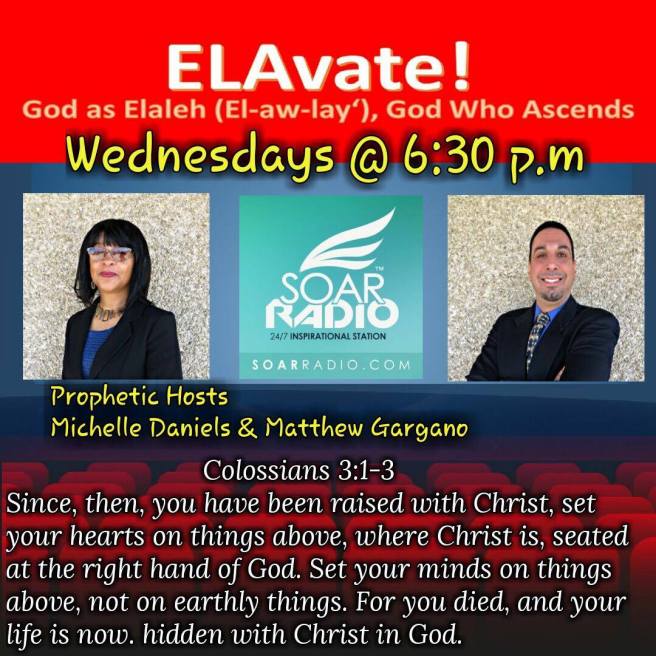